The Problem of Money in the Church.

Posted on September 8, 2019 by davidgrose 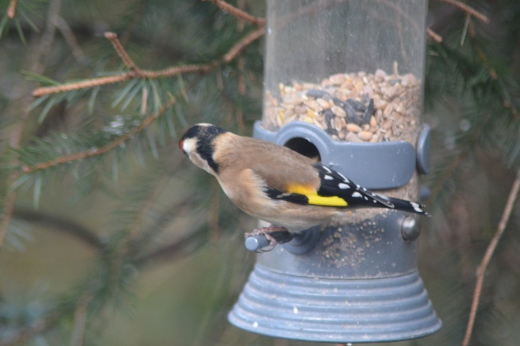 A visitor to my feeder in happier times.

When I came home from work yesterday I noticed a sparrow at my bird feeder then realised that something was wrong with it. I had omitted to fill it in the morning and this young fledgling in desperation had managed to get stuck in it, trying to get the remnant of the seed. I had to dismantle the feeder in order to release it. Its head was twisted by 180 degrees and when released its nape was exposed and bloodied and partly paralysed. I decided that it was a too pitiful sight to photograph. It was dying. I suddenly felt guilty about not topping up the feeder that morning. But what has this to do with money and the church? Christians are bombarded with opportunities to give whether to overtly Christian/evangelistic causes or more generally humanitarian ones. It is easy to argue that it is somebody else’s duty to give this time. If any ministry asks for money somebody is bound to shout “prosperity gospel” in their direction. True some ministries seem to be raising large amounts of money and are reputedly awash with funds. Others are living a hand to mouth existence.

But this is nothing new. The Reformation came about because of Luther’s objection to the Catholic Church’s selling of indulgences in order to finance the construction of the Sistine Chapel in Rome. The fact is that this has left a large hangover for the protestant churches of today with deep suspicion for any project that needs a substantial amount of cash. Some fundraisers for major Christian projects have likened their schemes to medieval cathedrals that may have taken a hundred years or more to build. Of course, the bishops who founded them claimed they were building them for the glory of God, but how many of them were also building for the glorification of their own egos as well? Mixed motives are nothing new. Equally, short-termism is a plague in modern society so I admit there is some merit in the analogy but we have to avoid looking at history through rose-tinted glasses. Also in some countries tithing became, in effect, a local tax that went to the established church whether you were an adherent or not. This too has left a legacy of resentment against the church and giving to overtly Christian causes. There is a real danger that some worthy causes that are in God’s will are being neglected because we fear that they may be a scam.

I have to admit that I had never heard the phrase “sowing a seed” until I started watching Christian television. The problem seems to be that some fundraisers are telling us to sow all our seed in one furrow and not scatter it over the rest of the field. Now if a farmer did that he would have a very poor harvest. If we have limited resources for the Kingdom then we must use them most efficiently. That might mean giving to some ministry that nobody has heard of rather than one that has shows all over the Christian media. But there is no fool-proof formula, true we should listen to the Holy Spirit to prompt us but there are also a lot of persuasive techniques used by fundraisers that pluck at the heartstrings of Christians as well. Of course, it is all to easy to justify not giving to this or that cause because of something negative we might have heard about them. All too often our “reasons” are actually prejudices based on hearsay rather than legitimate grounds. Unlike the sparrow I mentioned at the beginning of this post we may not see the collateral damage that occurs when we decline to give or give unwisely but the Lord knows are heart as it says in Proverbs.

I am a Bible believing Christian, brought up in the Brethren Movement, and now find myself associating with charismatics even though I do not always agree with them. I am in full-time employment. I have interests in history and photography amongst others.
View all posts by davidgrose →
This entry was posted in Christianity, reflections, Uncategorized and tagged Christianity, giving, Money, Tithing. Bookmark the permalink.