A Close Encounter of the Otter Kind.

The old Celtic saints often looked around themselves at God’s creation for inspiration. These days many Christians are afraid to do so publicly because evolutionists have claimed the realm of nature for themselves. Yet I find that God can often speak through nature. Sometimes through a landscape, at other times through the animal kingdom. In the last couple of days there has hardly been a cloud in the sky. There should have a baptism in the fellowship that I belong to, but the candidate did not appear. Instead it was decided to do a short open air service on a patch of open ground. I was itching to go for a walk afterwards.

The mountains were covered in snow but the valley floor was clear. As I walked towards the River Spey I noticed some birds in birch trees as I passed them and amongst them yellowhammers which usually fly off when they see a telephoto lens but on this occasion they hung around to photographed. When I reached the river and walked along in a downstream direction I noticed a dipper on the far bank. Again it allowed me to take a few pictures. And so it went on, I also saw goldeneye and a pair of goosanders. It was late afternoon when I reached the north end of the golf course and began to head back though I was distracted with bird calls a couple of times. There is a stretch of the riverside walk where it on top of an earthen cliff quite high above the river when I heard a splash which I initially assumed must have been a fish surfacing and stopped to look what had caused it but my vision was partially obscured by the trees along the bank. There was another splash nearby and then another. I was beginning to get my eye in but it took several glimpses of the creature to realise that it was an otter because I had never seen one in the wild. My first attempts to photograph it were hindered by the trees and I had to use manual focus but the time it spent on the surface was usually so short that by the time I focused on it was beginning to dive again. 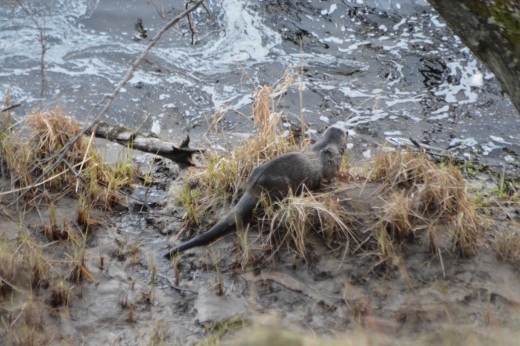 Eventually, it came onto the bank to swallow a catch and I managed to get several shots of it before it returned to the river. It was gradually moving downstream to a place where the cliff was not so steep and by going ahead I managed to descend down towards the river’s bank and get better shots of it.

Even so I still had to use manual focus to see through the overhanging vegetation so most shots were often slightly out of focus. The above picture is one of sharpest taken. Then it came ashore again a few yards upstream. But it was largely hidden by a fallen branch and when I took a picture the flash went off and it jumped to a position right in front of me. Its face was partially obscured by grass and I took a couple quick shots but only the second one was in focus. The flash went off both times and it was clearly disturbing the otter.

I hesitated to take another picture. As I lowered the camera the animal looked me in the eye and I apologised to it for frightening it and it slowly, but gracefully slipped back into the river and out of sight. A trail of bubbles from the air trapped in its fur slowly rose to the surface was the only possible indication of the direction of travel but I did not see it surface again. I checked my watch and it was after 5:10pm. So I continued on my journey back home.

Looking back and searching for a spiritual point to this I realised that if I had skipped the open air service then I would have probably missed the otter. When we put God first he may bless us in ways that we were not expecting. I may never see an otter in the wild again, certainly this close. None of the above pictures have been cropped in any way and the ones of the otter were taken with a 300mm lens.

I am a Bible believing Christian, brought up in the Brethren Movement, and now find myself associating with charismatics even though I do not always agree with them. I am in full-time employment. I have interests in history and photography amongst others.
View all posts by davidgrose →
This entry was posted in Christianity, reflections, Uncategorized and tagged Christianity, otter, photography. Bookmark the permalink.

1 Response to A Close Encounter of the Otter Kind.