It is Better to Give Than Receive.

Last year I posted that I had put up a bird feeder in my garden. I had long resisted putting one up my reasoning was that I would be interfering with nature. How easy it is to justify being stingy! Likewise we try and justify being mean to God. When we ask “How much should we give?” What we really mean is “How little can I get away with giving?” There are many instances of people who have after giving generously have reaped even more generously. Yet the principle of sowing and reaping has been exploited by some as a means of obtaining wealth a bit like a heavenly lottery ticket. Along the lines of give so much to this ministry then God will reward you so much you will become fabulously wealthy. This discredits more worthwhile ministries who struggle to make ends meet. After all, if God owns the cattle on a thousand hills why should he need the widow’s last mite? Obviously not. But the funny thing is that the more I am generous in feeding the birds in my garden then the more opportunities I find that have to photograph wildlife. Now one could argue that is  because I have been practicing my skills and therefore I am  finding better opportunities to take pictures. For instance, a few weeks ago I noticed a warbler in the tree in my garden and was amused to find that one of the pictures showed it having a good scratch.

A couple of months ago whilst out walking I managed to take a photograph of a female black redstart which is a rare bird in the Highlands. Again these opportunities seem to arise more often. But one cannot just expect to these opportunities to happen, you have to go looking for them. Likewise, with God’s blessings how many Christians expect God to bless them with some spectacular wonder when they sit at home on their sofas watching Christian television without any real effort on their part.

Again here is another picture I took, though heavily cropped, I was walking along by a partially dried up backwater of the Spey when I noticed in the distance a small bird apparently trying to wash itself in a pool. As I walked closer it flew away before I could identify it. I then noticed a tree creeper in a nearby tree but I was unable to get clear a photo of it as it moved around until it flew away. Shortly afterwards the tree creeper returned to bathe in a pool in front of me, though between me and the bird there was a large amount flood debris which both acted as a barrier and a makeshift hide. Again it flew off, but soon returned to a tree on the opposite side of the backwater and managed to some more photos, but I soon noticed a second tree creeper and they flew off together. I began to think they might be a nesting pair. I might have tried to look for their nest if I had the faintest clue as to what a tree creeper’s nest looked like. I was totally ignorant. But it so happened that I had a week’s holiday so that I was able to walk along that stretch of the river at leisure. A few days later I was walking along the same backwater near where it rejoined the river when I again saw a tree creeper. Normally when a tree creeper lands on a tree it lands near the base of the trunk a proceeds to climb up it looking for insects, but this tree creeper landed on the stump of tree near its top and disappeared round the other side out of view. After a few seconds it flew away in a different direction from which it had come. I waited a few minutes before it or its partner returned with more food. I had found the nest. 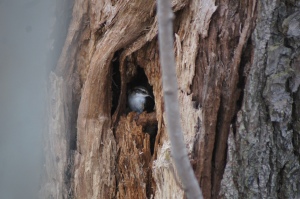 Within ten days of my finding the nest the chicks had fledged, so there was only a window of opportunity in which to find the nest. I could have said to myself that only expert ornithologists find would be able to a tree creeper’s nest and thus dismiss the possibility of finding the nest from my mind and not recognise what I saw as a nesting site. So there is the possibility that we will fail to grasp the opportunity to receive God’s blessings through disbelief or disobedience. One of Satan’s favourite tricks is to tell Christians that they are not good enough to be Christians. But then you have to admit you are a sinner to before you can become a Christian. We are all works in progress. Our righteousness is filthy rags, as Paul says, so we are dependent on the Blood for our salvation. So if a Christian feels that though they are giving to God but not receiving the blessings they expected then that may be because he may be blessing them in other ways that were not on their wish list. As the old chorus used to say “Count your blessings name them one by one, and it will surprise you what the Lord has done.”

I am a Bible believing Christian, brought up in the Brethren Movement, and now find myself associating with charismatics even though I do not always agree with them. I am in full-time employment. I have interests in history and photography amongst others.
View all posts by davidgrose →
This entry was posted in Christianity, reflections and tagged blessings, Christianity, Tree Creeper. Bookmark the permalink.